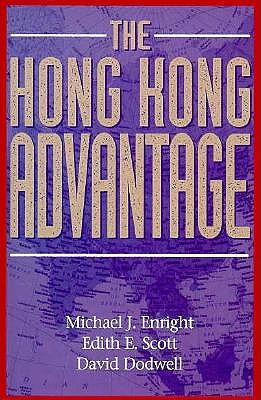 With its rapidly approaching transition from British to Communist Chinese rule, the "future of Hong Kong" has been a frequent story for news reporters in both the East and the West. But the July 1st transfer of power has been seen mostly as a political event, with virtually no analysis of the economic future of one of the world's most important business centers. Now, in The Hong Kong Advantage, readers have the conclusions of a year-long study of the competitiveness of Hong Kong, in a volume that sheds light on both the colony's profitable past and its prospects in coming years.
Enright, Scott, and Dodwell highlight a number of reasons for the colony's prosperity--its unique intermingling of thousands of local and overseas firms; the hands-off policy of the colonial government; a singular blend of firms with steady cash flow (transportation, property, or utilities) and firms relying on flexibility, rapid response, and competitive pricing (clothing, toys, electronics); and its central location in the most dynamic economic region in the world. But the greatest reason for its success has been its metamorphosis into an information and knowledge-based economy, acting in particular as a metropolitan center for mainland China, combining the land, labor, and resources of the interior with the design, marketing, and logistics skills found in Hong Kong. The authors contend that this engine of prosperity should continue--and indeed grow stronger--after the transfer of power. Hong Kong's most pressing challenges, the book concludes, are problems generated by its own success, such as its high-cost economy (with rising rents, wages, and compensation packages) and the growing need for more highly skilled workers. If its business leaders can cope with these problems, the authors conclude, Hong Kong's economic future should be as successful as its past.
The Hong Kong Advantage is a book that everyone concerned about Hong Kong's economic future--and indeed the economic future of Asia and the world--will want to read.