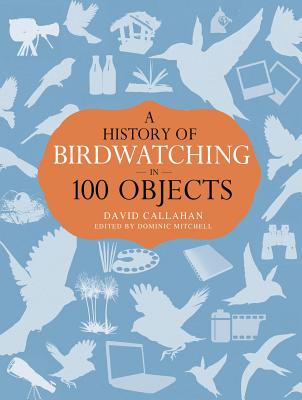 A History of Birdwatching in 100 Objects

An unmarked "gift quality" book "looks at 100 key objects that profoundly shaped the way in which people have watched, studied and engaged with the avian world from pre-history to the modern day."

This book looks at 100 items that have profoundly shaped how people watched, studied and engaged with the avian world. Each item contains around 500 words on a double-page spread and include an illustration of the object in question. The book includes the objects listed below as well as many more.The range of items is international and cross-cultural. Subjects include:

An Egyptian 'field guide' early tomb decorations of birds, identifiable as species]
Ornithologiae libri tres the first British bird guide a 1676 publication that attempted to itemise all British birds known at the time]
The Dodo specimen held at the Horniman museum
Systema Naturae by Carl Linnaeus the first-ever system of scientific names in 1758, and still the international standard today]
The shotgun
The book, The Natural History and Antiquities of Selborne by Gilbert White 1789]
HMS Beagle the ship on which Darwin made his ground-breaking discoveries]
Aluminium bird rings used to record movement and longevity of individuals and species]
along with many more modern innovations including walkie talkies, pagers, radio tags and apps.

Title: A History of Birdwatching in 100 Objects

A History of Birdwatching in 100 Objects