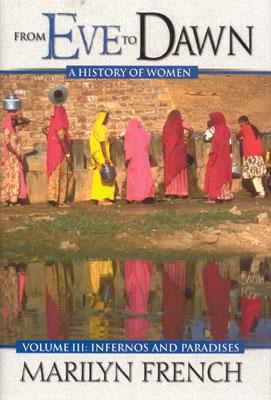 From Eve to Dawn: A history of Women - Volume 3 : Infernos and Paradises

This is a seminal three-volume work, that covers the history of women throughout the world, from earliest times to the present. Marilyn French, internationally bestselling author of The Women's Room, has spent over two decades with a team of researchers and historians examining women's roles and activities in various civilizations and societies throughout the ages. In this final volume of her trilogy on the history of women, Marilyn French examines the role of women in the 19th and 20th centuries. The triumph of capitalism in the 19th century marked the lowest point for women, particularly for those caught in inhumane working conditions in industry and living in squalid cities. These years also marked a turning point, as women stood together and demanded an end to subjugation. They claimed the right to education, to professions, to the vote, and to own property. Everything exploded in the 20th century, which was convulsed by revolution, genocide, and war. The two world wars gave way to socialism, fascism, communism, anti-imperialism, and calls for democracy and equality. Women played a part in all these movements, yet change proved elusive. end of the century, the most enduring reforms resulted from peaceful campaigns by unions, civil rights workers, and feminists. At the dawn of the 21st century, there is hope for women. The feminist movement is the most important revolution ever. It challenges the root of patriarchy - the idea that one sex is superior to the other and has authority over it.

Title: From Eve to Dawn: A history of Women - Volume 3 : Infernos and Paradises

From Eve to Dawn: A history of Women - Volume 3 : Infernos and Paradises