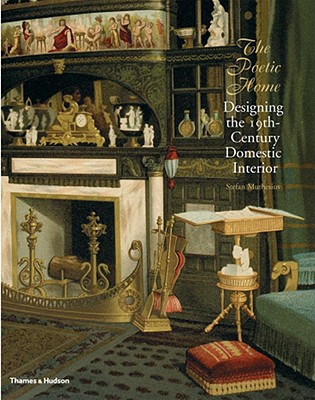 Lucid text and lavish illustrations trace the evolution of interior design in nineteenth-century America and Europe.
This beautifully illustrated and meticulously researched book reveals the emergence of a new sensibility in the design of the home in Europe and America during the nineteenth century.
"Poetic home" was the expression used to describe the designer's task of creating atmosphere and character in the ordinary living room. There was a new emphasis on the texture and color of fabrics, wood, and wallpaper, as well as on the more abstract ideas of line and form, light and dark. A different concept of the interior arose, stressing the "mood" of each room, alongside a fervent concern for national identity and a country's bygone age: interiors were now to express an "Old English," "ancien regime," or "Old Colonial" character.
Manufacturers' catalogues, designers' sample books, and periodicals communicated these ideas to a growing audience. With them came a new verbal and visual language and a new understanding of the client's role. Large-scale manufacture and carefully organized stores catered to the demands of householders increasingly aware of design. The way a room was visualized and discussed then continues to mark our sense of the "good interior." 300 illustrations, 120 in color.