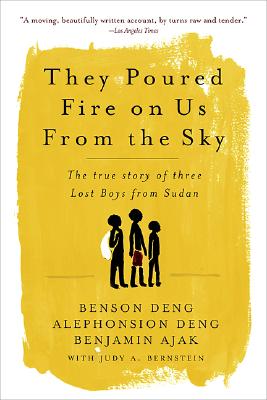 They Poured fire on us from the Sky : The true Story of Three Lost Boys from Sudan

Benjamin, Alepho, and Benson were raised among the Dinka tribe of Sudan. Their world was an insulated, close-knit community of grass-roofed cottages, cattle herders, and tribal councils. The lions and pythons that prowled beyond the village fences were the greatest threat they knew.

All that changed the night the government-armed Murahiliin began attacking their villages. Amid the chaos, screams, conflagration, and gunfire, five-year-old Benson and seven-year-old Benjamin fled into the dark night. Two years later, Alepho, age seven, was forced to do the same. Across the Southern Sudan, over the next five years, thousands of other boys did likewise, joining this stream of child refugees that became known as the Lost Boys. Their journey would take them over one thousand miles across a war-ravaged country, through landmine-sown paths, crocodile-infested waters, and grotesque extremes of hunger, thirst, and disease. The refugee camps they eventually filtered through offered little respite from the brutality they were fleeing.

In They Poured Fire on Us From the Sky, Alepho, Benson, and Benjamin, by turn, recount their experiences along this unthinkable journey. They vividly recall the family, friends, and tribal world they left far behind them and their desperate efforts to keep track of one another. This is a captivating memoir of Sudan and a powerful portrait of war as seen through the eyes of children. And it is, in the end, an inspiring and unforgettable tribute to the tenacity of even the youngest human spirits.

Title: They Poured fire on us from the Sky : The true Story of Three Lost Boys from Sudan

They Poured fire on us from the Sky : The true Story of Three Lost Boys from Sudan