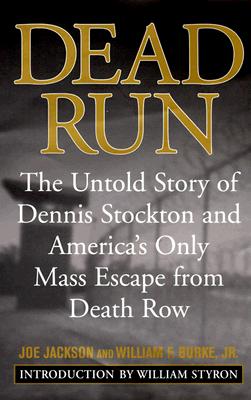 Dead Run: The Untold Story of Dennis Stockton and America's Only Mass Escape from Death Row

Summers are always stifling in southern Virginia, and they're even hotter on the Mecklenburg Correctional Center's Death Row when Dennis Stockton arrives there in July 1983. Charged with murder for hire, Stockton insisted he was innocent, but his jury sentenced him to die. In prison, he begins keeping a diary and it soon becomes his lifeline, nurturing dreams of freedom and publication as an author.
Mecklenburg's officials had always prided themselves on running a secure prison, but that left them vulnerable to an ingenious escape conspiracy. Though indispensable in the plotting, Stockton decides not to run, betting instead on a new trial and exoneration. The escape of the "Mecklenburg Six" is dazzlingly suspenseful, as they take hostages, don guards' uniforms, and, staging a monumental bluff, make history with America's first mass escape from Death Row. Mean-while, Stockton notes it all in his journal.
After the escape, a Norfolk newspaper editor, William F. Burke, Jr., writes to the remaining inmates, seeking information on the unprecedented breakout. Stockton's diary becomes the most revealing account, and when excerpts are published, a scandalous portrait of Death Row emerges: bribed guards, marijuana plants, homebrew alcohol, weapon stashes, unlocked cell doors, and jailhouse sex. Overnight, Stockton becomes the most hated man in Virginia's prisons for his expose. During the next eleven years, he survives plots against his life and endures subhuman conditions.
Throughout his ordeal he struggles to find his voice as a writer, while battling to gain a new trial and escape the "monster factory," his name for Death Row. As Stockton's scheduled execution nears, the case against him begins unraveling, leaving readers to ponder the true nature of justice.

Dead Run: The Untold Story of Dennis Stockton and America's Only Mass Escape from Death Row