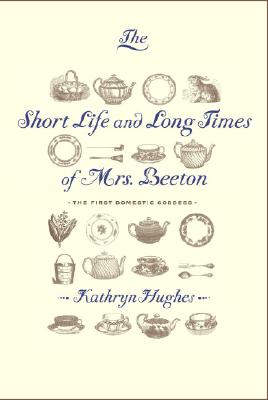 The Short Life And Long Times of Mrs. Beeton

"In this delightful, superbly researched biography, award-winning historian Kathryn Hughes pulls back the lace curtains to reveal the woman behind the book - Mrs. Beeton, the first domestic diva of the modern age - and explores the life of the book itself."

In Victorian England there was only one fail-safe authority on matters ranging from fashion to puddings to scullery maids: "Beeton's Book of Household Management." In this delightful, superbly researched biography, award-winning historian Kathryn Hughes pulls back the lace curtains to reveal the woman behind the book--Mrs. Beeton, the first domestic diva of the modern age--and explores the life of the book itself.
Isabella Beeton was a twenty-one-year-old newlywed with only six months' experience running her own home when--coaxed by her husband, a struggling publisher--she began to compile her book of recipes and domestic advice. The aspiring mother hardly suspected that her name would become synonymous with housewifery for generations. Nor would the women who turned to the book for guidance ever have guessed that its author lived in a simple house in the suburbs with a single maid-of-all-work instead of presiding over a well-run estate. Isabella would die at twenty-eight, shortly after the book's publication, never knowing the extent of her legacy.
As her survivors faced bankruptcy, sexual scandal and a bitter family feud that lasted more than a century, Mrs. Beeton's book became an institution. For an exploding population of the newly affluent, it prescribed not only how to cook and clean but ways to cope with the social flux of the emerging consumer culture: how to plan a party for ten, whip up a hair pomade or calculate how much money was needed to permit the hiring of a footman. In the twentieth century, Mrs. Beeton would be accused of plagiarism, blamed for the dire state of British cookery and used to market everything from biscuits to meat pies.
This elegant, revelatory portrait of a lady journalist, as she lived and as she existed in the minds of her readers, is also a vivid picture of Victorian home life and its attendant anxieties, nostalgia, and aspirations--not so different from those felt in America today.

Title: The Short Life And Long Times of Mrs. Beeton

The Short Life And Long Times of Mrs. Beeton