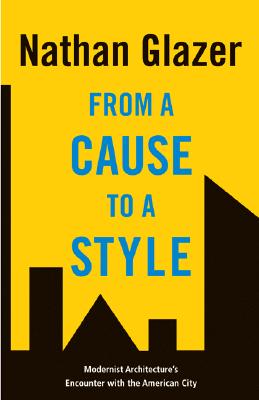 From a Cause to a Style : Modernist Architecture's Encounter with the American City

Modernism in architecture and urban design has failed the American city. This is the decisive conclusion that renowned public intellectual Nathan Glazer has drawn from two decades of writing and thinking about what this architectural movement will bequeath to future generations. In "From a Cause to a Style," he proclaims his disappointment with modernism and its impact on the American city.

Writing in the tradition of legendary American architectural critics Lewis Mumford and Jane Jacobs, Glazer contends that modernism, this new urban form that signaled not just a radical revolution in style but a social ambition to enhance the conditions under which ordinary people lived, has fallen short on all counts. The articles and essays collected here--some never published before, all updated--reflect his ideas on subjects ranging from the livable city and public housing to building design, public memorials, and the uses of public space. Glazer, an undisputed giant among public intellectuals, is perhaps best known for his writings on ethnicity and social policy, where the unflinching honesty and independence of thought that he brought to bear on tough social questions has earned him respect from both the Left and the Right. Here, he challenges us to face some difficult truths about the public places that, for better or worse, define who we are as a society.

"From a Cause to a Style" is an exhilarating and thought-provoking book that raises important questions about modernist architecture and the larger social aims it was supposed to have addressed-and those it has abandoned.

Title: From a Cause to a Style : Modernist Architecture's Encounter with the American City

Description: An unmarked, as new book.

From a Cause to a Style : Modernist Architecture's Encounter with the American City