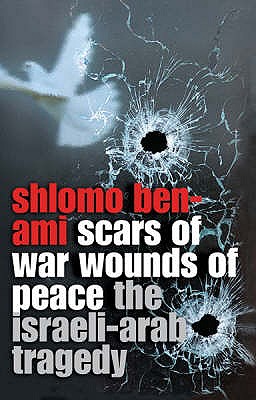 Scars of War, Wounds of Peace : The Israeli-Arab Tragedy

Former Israeli Foreign Minister Shlomo Ben-Ami was a key figure in the Camp David negotiations and many other rounds of peace talks, public and secret, with Palestinian and Arab officials. Here he offers an unflinching account of the Arab-Israeli conflict, informed by his firsthand knowledge of the major characters and events.
Clear-eyed and unsparing, Ben-Ami traces the twists and turns of the Middle East conflict and gives us behind-the-scenes accounts of the meetings in Oslo, Madrid, and Camp David. The author paints particularly trenchant portraits of key figures from Ben-Gurion to Bill Clinton. He is highly critical of both Ariel Sharon and the late Yasser Arafat, seeing Arafat's rejection of Clinton's peace plan as a crime against the Palestinian people. The author is also critical of President Bush's Middle East policy, which he calls "a presumptuous grand strategy." Along the way, Ben-Ami highlights the many blunders on both sides, describing for instance how the great victory of the Six Day War launched many Israelis on a misbegotten "messianic" dream of controlling all the Biblical Jewish lands, which only served to make the Palestinian problem much worse. In contrast, it has only been when Israel has suffered setbacks that it has made moves towards peace. The best hope for the region, he concludes, is to create an international mandate in the Palestinian territories that would lead to the implementation of Clinton's two-state peace parameters.
Scars of War, Wounds of Peace is a major work of history--with by far the most fair and balanced critique of Israel ever to come from one of its key officials. This paperback edition features a new Epilogue by the author featuring an analysis of the most recent events in the Israeli-Arab situation, from the disappearance of Ariel Sharon from public life to the emergence of Hamas and Israel's recent war against Hizballah. It is an absolute must-read for everyone who wants to understand the dynamics of the Arab-Israeli conflict.

Title: Scars of War, Wounds of Peace : The Israeli-Arab Tragedy

Scars of War, Wounds of Peace : The Israeli-Arab Tragedy